If, like many a lazy tourist, you baulk at paying €8 for a museum or art gallery which you’ll probably be bored out of your mind in – well, have I got news for you! Many of Madrid’s major galleries and museums have free hours or even free days!

Taking advantage of one of these, we popped along to the Reina Sofia blah blah blah Museum tonight. The Reina Sofia is free each day between 7 and 9pm – and it turns out that that’s my price range!

We approached the museum from Embajadores which means we managed to come in the back door. This was probably a great thing as far as queues go (there weren’t any) but we did spend most of our trip kinda lost.

The building is superb – and arranged around a beautiful garden with a central fountain and a few odd sculptures lying around. We particularly enjoyed a Miro sculpture Pájaro lunar which is quite clearly a rhinoceros although C insists that it means ‘moon bird’ or some other rubbish. Clearly a rhinoceros. 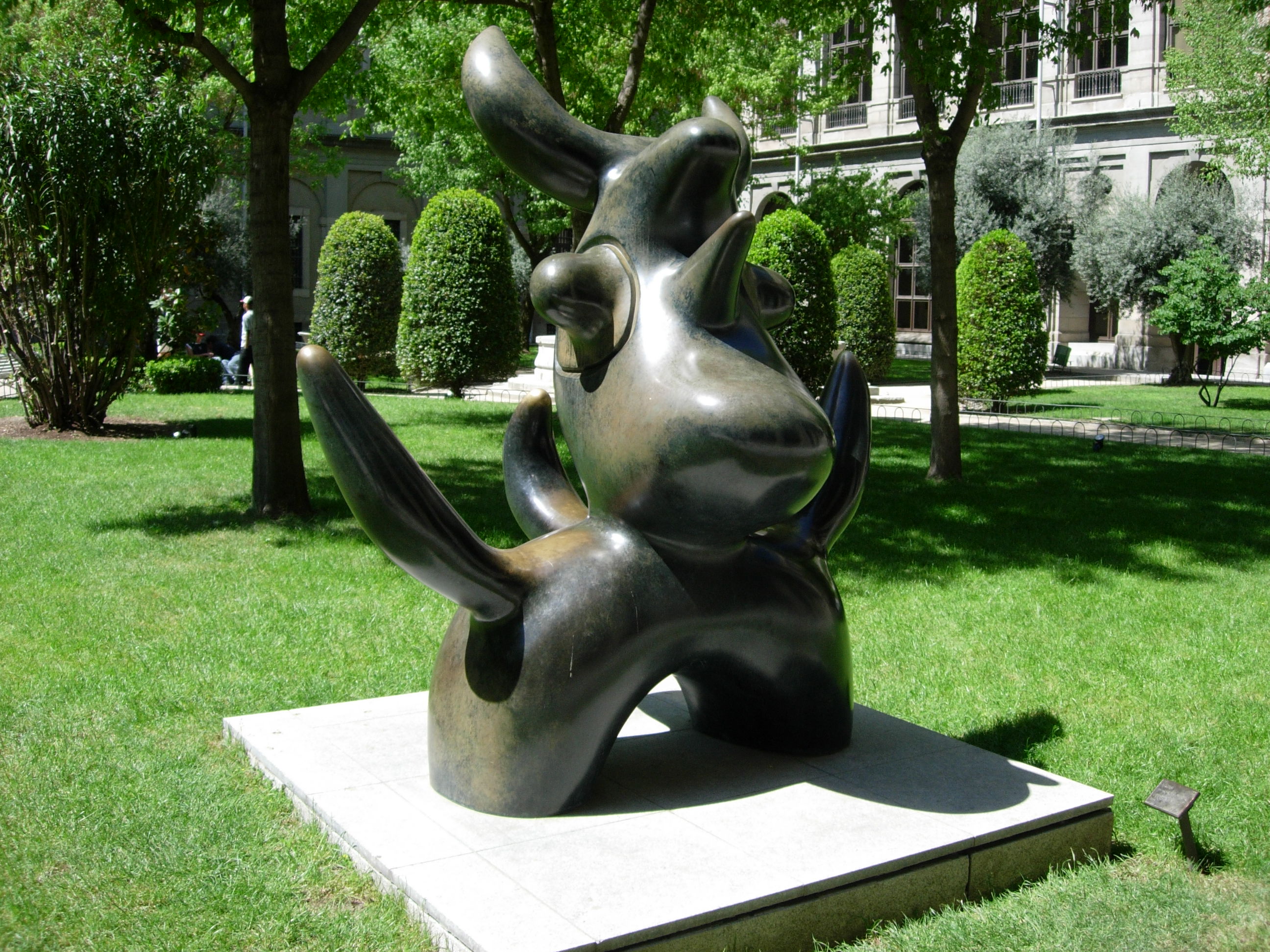 The Sofia Reina Something or Other is famous around the world as being the home of Picasso’s Guernica. Which I’m sure is breathtaking. But we somehow managed to miss it… mostly because we became a little pre-occupied with a temporary exhibition in the bottom floor gallery on playgrounds.

Fans of this blog will know that, although I am no fan of children, we are fans of playgrounds. And the Sofia Thingy has a whole exhibition on playgrounds!

Apparently, the exhibition “analyses the socialising, transgressive and political potential of play when it appears linked to public space”. That sounds rad. We mostly just liked looking at all the different playground designs and deciding which ones we would’ve liked as kids.

A big part of the exhibition was about some German dude whose name I’ve forgotten but who transformed otherwise empty and bleak places into places that invited play. I’m not sure if we’d think much of them now – he put in just a few climbing bars, a small dome, some concrete pillars – but at the time I suppose they were revolutionary. Funny to think of playgrounds as places of protest, places where people flaunt standards. “I’m going to hang upside down from these bars and tuck my skirt into my undies and who cares?” Who indeed?

This article would be greatly improved by the addition of a picture of German dude’s playgrounds. In place of which I give you some dome in Berlin which is probably similar.

Another piece that both C and I liked was a photo taken of Coney Island in 1940. The entire beach is completely full of people, many of whom seem to know that their photo is being taken. They are all waving up at the cameraman, in their swimmers, with their fat rolls and hairy armpits, squinting in the sun. It’s so unglamorous and REAL and I loved it! This version is similar but not the same as the one in Sofia Reina Thingy.

We rounded out our trip by going for some beers somewhere nearby where the tapas were excellent. I’m sure if I bothered to look it up I could find out what it’s called. Hang on a mo.

Oh wow, look at me! I negotiated the horror that is the new Google maps and I bring you the probably-correct-but-who-knows location of the really good tapas place!

That whole area is pretty cool, actually. Not as cheap as where our apartment is, but still really interesting and not too expensive. For €10.00 we got 4 bottles of beer and two very decently sized tapas. Not bad for a quick night out on the playground.

What about you? Do you have a favourite playground? Or one that you think is just bloody awesome?

This site uses Akismet to reduce spam. Learn how your comment data is processed.

The Office of Dead Letters

Where I’m not writing in lockdown

Where I’m not writing in lockdown

If you said YES to any of those things, then my newsletter is for you!

Sign up now and receive a FREE short story delivered wiggly to your inbox.

And around once a month, I’ll send you updates on the world of writing and travel, and stories about rescue cats and beer.